Featured Quote:
This week, this topic took on even more meaning as my friend & constituent, Doug, recently lost his battle with ALS. ALS disproportionately impacts Veterans, like Doug. We must encourage innovation & research at the NIH, & remove barriers to developing better treatments at FDA.

i
News from Congressman

Top House Republicans criticized a Democratic proposal to spend $1 billion to fund the creation of a new privacy bureau at the Federal Trade Commission, saying it would serve a partisan agenda rather than improve the privacy needs of Americans.

As part of their $3.5 trillion infrastructure and social welfare reconciliation spending package, House Democrats on the Energy and Commerce Committee are pushing for almost triple the trade commission’s current annual budget to build a bureau within the agency focused on online privacy and user data protection.

Many tech giants — such as Facebook, Google, and Amazon — have come under fire for their controversial data gathering and usage practices that often secretly infringe on users’ privacy.

Both parties favor establishing a national privacy standard and holding Big Tech companies more accountable for how they gather and use the data they collect. But Republicans say Democrats are not moving the country in that direction with their proposal.

Bilirakis is the top Republican on the House Energy and Commerce consumer protection panel that deals with regulating tech companies on privacy and data security.

Congressman Gus M. Bilirakis is a Republican from Palm Harbor, representing Florida’s 12th Congressional District, which includes all of Pasco and northern parts of Pinellas and Hillsborough counties. He was first elected to Congress on November 7, 2006. Gus serves on the Energy and Commerce Committee.  He is the Ranking Member of Consumer Protection & Commerce Subcommittee and a Member of the Health Subcommittee and Communications and Technology Subcommittee.  With 38 bills he authored signed into law since 2015, Congressman Bilirakis was recently designated as the Most Effective Republican Lawmaker in the State of Florida by the Center for Effective Lawmaking at Vanderbilt University.

Committee on Energy and Commerce (2013–present)

Gus Michael Bilirakis (/ˌbɪlɪˈrækɪs/ BILL-i-RACK-iss; born February 8, 1963) is an American lawyer and politician serving as the U.S. representative for Florida’s 12th congressional district since 2013. A member of the Republican Party, he first entered Congress in 2007, where he succeeded his father Michael Bilirakis, representing Florida’s 9th congressional district until redistricting. His district includes much of the northern portion of the Tampa Bay area. Bilirakis previously served as the Florida state representative for the 48th district from 1998 to 2006.[1]

Bilirakis was born in Gainesville, Florida, and grew up in Tarpon Springs, Florida, the son of Evelyn (née Miaoulis) and Michael Bilirakis.[2] He lives in Palm Harbor and is the grandson of Greek immigrants. His grandfather owned a local bakery where Bilirakis worked from a young age.

Bilirakis graduated from Tarpon Springs High School and St. Petersburg Junior College. He then attended the University of Florida, where he graduated in 1986 with a bachelor’s degree in political science. He received his J.D. degree from the Stetson University College of Law in 1989. He was an intern for U.S. President Ronald Reagan.[3]

Bilirakis operates a Tampa Bay area law practice, the Bilirakis Law Group, specializing in probate and estate planning, which he took over from his father, Michael Bilirakis. His father served in Congress from 1983 to 2007, and Gus helped run his campaigns.

Bilirakis was first elected to the Florida House of Representatives in 1998 when he won the District 48 seat held for 10 years by Representative Sandy Safley, R-Clearwater, who decided not to run again. This district covers most of north Pinellas County, part of Pasco County, and part of Hillsborough County.

During his tenure in Tallahassee (1998–2006), he chaired several panels including Crime Prevention, Public Safety Appropriations, and the Economic Development, Trade, & Banking Committee.[citation needed]

In 2006, Michael Bilirakis announced his retirement after 24 years in Congress, and Gus Bilirakis entered the race to succeed his father in what was then the 9th District. He defeated Hillsborough County Commissioner Phyllis Busansky in the general election with 55% of the vote to become the district’s second representative. He has been reelected three more times without substantive opposition. 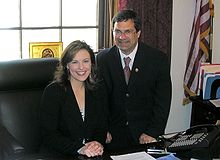 He is a signer of the Taxpayer Protection Pledge[7] and a pledge sponsored by Americans for Prosperity promising to vote against any climate change legislation that would raise taxes.[8]

On September 29, 2008, Bilirakis voted against the Emergency Economic Stabilization Act of 2008.[9]

In 2022, Bilirakis voted against naming a federal building in Florida after Joseph W. Hatchett, the first Black State Supreme Court judge in Florida and south of the Mason-Dixon line.[10] 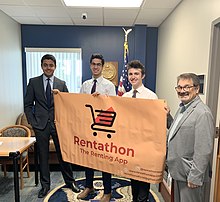 On February 11, 2017, Bilirakis hosted a townhall in Pasco County, Florida, where he was faced with several protesters angry over the potential repeal of the Affordable Care Act, when a member of the local party (an unauthorized speaker for the county REC), Bill Akins repeated the now debunked claim that the ACA contains “what is effectively known as death panels“. Biliarkis nodded in agreement and later told CNN, “The board exists, OK? And I’ve voted to repeal the board.” Biliarkis seemed to equate the “death panel” with the Independent Advisory Board, a 15-member committee that issues recommendations for reducing healthcare costs, subject to congressional oversight and approval.[12][13]

In early October 2018, Bilirakis released a campaign advertisement touting his work fighting opioids in Pasco County, Florida. In the advertisement, he took credit for a law he did not have a hand in crafting. The 30-second ad flashed text about a “Bilirakis INTERDICT ACT” as Pasco County Sheriff Chris Nocco said Bilirakis is “giving us the tools to do our job and get traffickers off the street”. The INTERDICT Act provides funding and equipment to U.S. Customs and Border Protection for detecting imported fentanyl. But Bilirakis was neither a sponsor nor one of 18 co-sponsors, making it unclear how it is the “Bilirakis INTERDICT Act”.[14][15]

As a U.S. Representative, Bilirakis has voted on several pieces of legislation pertaining to firearms. He supported H. R. 38, which would enable concealed carry reciprocity among all states if and when it is signed into law.[19]

In March 2017, Bilirakis voted for the Veterans Second Amendment Protection Act, which, if signed into law, would prohibit, in any case arising out of the administration of laws and benefits by the Department of Veterans Affairs, any person who is mentally incapacitated, deemed mentally incompetent, or experiencing an extended loss of consciousness, of the right to receive or transport firearms, without the order or finding of a judicial authority of competent jurisdiction.[20]

After the 2017 Las Vegas shooting, Bilirakis signed a letter written to the Bureau of Alcohol, Tobacco, Firearms and Explosives, urging it to reevaluate the legal status of bump stocks. No action had been taken as of March 2018.[21]

In the wake of the Stoneman Douglas High School shooting in 2018, Bilirakis said that he would be willing to consider gun control legislation, “if that’s what it takes”.[22] He said that, specifically, he would support more school resource officers in schools.[22] He also announced his support for legislation that would ensure “that those who are mentally ill do not have access to weapons”.[23]

On October 1, 2020, Bilirakis co-signed a letter to Secretary of State Mike Pompeo that condemned Azerbaijan‘s offensive operations against the Armenian-populated enclave of Nagorno-Karabakh, denounced Turkey‘s role in the Nagorno-Karabakh war, and called for an immediate ceasefire.[24]

In December 2020, Bilirakis was one of 126 Republican members of the House of Representatives to sign an amicus brief in support of Texas v. Pennsylvania, a lawsuit filed at the United States Supreme Court contesting the results of the 2020 presidential election, in which Joe Biden defeated[25] incumbent Donald Trump. The Supreme Court declined to hear the case on the basis that Texas lacked standing under Article III of the Constitution to challenge the results of an election held by another state.[26][27][28]

In an editorial, the Tampa Bay Times wrote that Bilirakis “chose partisan games over national interest”. The Orlando Sentinel published an editorial calling the signers of the amicus brief a “national embarrassment”, a “danger to democracy”, and the “Sedition Caucus“.[29][30] House Speaker Nancy Pelosi issued a statement that called signing the amicus brief an act of “election subversion”.[31][32]

Many of the signers of the Texas v. Pennsylvania amicus brief objected to the certification of the 2020 Electoral College vote, but Bilirakis was absent due to contracting COVID-19.[33]

As a result of the 2021 United States Capitol attack, the House of Representatives impeached Trump a second time. Bilirakis voted against impeachment, calling it “politically motivated” and a “highly polarizing ruse that will only further divide Americans”.[34]

Bilirakis has four children[35] and is an Eastern Orthodox Christian.[36]

In 2014, Bilirakis had a cameo as a job applicant in the feature film Walt Before Mickey starring Thomas Ian Nicholas, Jon Heder, and Armando Gutierrez.[37]

The Consumer Protection and Commerce Subcommittee works to protect all Americans from predatory scams, investigate potential social media monopolies, encourage and spur innovation of emerging technologies, and defend against security breaches involving sensitive consumer data. This position also provides a unique opportunity to help the travel and tourism industry – which is vital to Florida’s economy and job market – as it seeks to fully rebound from the global pandemic.

Health Subcommittee: The U.S. is home to a constant stream of cutting-edge medical advancements, but these innovations can only benefit patients and spur our economy if the FDA regulatory process keeps pace. The Health Subcommittee has developed key reforms to promote this type of medical advancement, part of its broader efforts to support market-based improvements to our health care system and reject heavy-handed government control.

Learn more about legislation sponsored and co-sponsored by Congressman Bilirakis.